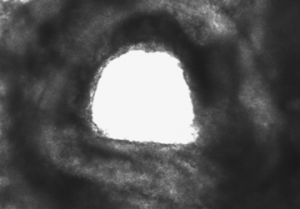 Precision cut lung slices provide a model system to study various aspects of airway and lung physiology and pathophysiology. Aspects that can be recapitulated include airway narrowing, emphysema and alveolar repair, airway remodeling and inflammation. Treatments can be added at the initiation of the culture or following exposure to stimuli (i.e. TGF-β, elastase). Slices can be prepared from animal or human tissue.

The key advantage of this model is that all lung cell types are present in their natural architecture and cell-cell contacts and cell-matrix interactions are preserved. Moreover, a large number of lung slices can be prepared from a single lung specimen, which does not only reduce the number of animals needed but also allows the direct comparison of experimental treatments with a control from the same animal or patient.

Additional read-outs are available on request.

The impact of your investigational compound on airway narrowing or pulmonary vascular function can be investigated using time lapse video microscopy. The impact of bronchodilators or vasodilator drugs on small airways and vessels specifically can be measured using this model. In addition, this model can be combined with in vivo models to measure the impact of in vivo exposure to disease stimuli and/or treatment with drugs on airway function ex vivo. We have shown efficacy of several bronchodilator drugs (e.g. β-agonists) in this system, both against histamine and allergen-induced contractions. Furthermore, we can investigate the efficacy of your compound against contraction induced by electrical field stimulation i.e. vagal stimulation. 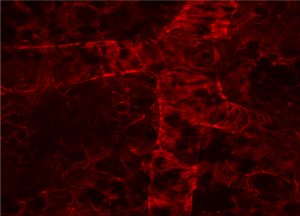 Elastase breaks down elastin, a structural component of lung tissue, and thereby contributes to emphysema in COPD. In lung slices, exposure to elastase induces emphysema, assessed by an increase in mean linear intercept, and affects airway narrowing and markers of alveolar type I and type II cells. This can partly be prevented by WNT stimulation.

Exposure to cytokines, including IL-1β, induces an inflammatory response in lung slices. Although there is clearly no circulation, resident macrophages are present in the lung slices. Increased IL-8 release can be prevented by corticosteroids.

There are numerous possibilities with studies in lung slices, please feel free to contact use with your specific questions.

Scroll to top
We use cookies to ensure that we give you the best experience on our website. If you continue to use this site we will assume that you are happy with it.Ok